'Blek le Rat', otherwise known as Xavier Prou, is a French postmodern graffiti and public-space artist. Educated at the prestigious Ecole Nationale Supérieure des Beaux-Arts in Paris, where he studied fine art and architecture, Prou was one of the first (following on from Gérard Zlotykamien) to create stencil paintings on public buildings in the French capital in the 1980s. Xavier Prou is generally considered to be a pioneer and innovator of the street-art and graffiti movement, and is acknowledged by numerous contemporary artists as a major influence - with British artist Banksy notably stating his admiration for Prou's work. Prou's painting can be characterized as 'guerilla-art' - emphasizing its unorthodox and underground nature, and he has worked with a variety of mediums throughout his career - such as spray-paint and stencils, canvas painting, photographs, and lithography. Prou's work typically depicts images of pop-culture or historical figures (sometimes including himself) in incongruous or surreal settings, painted in lively, vivid and eye-catching colors. Notable compositions by Xavier Prou include Madonna with Child (Leipzig, 1991), and the Escaping Paris collection of lithographs (New York, 2014). 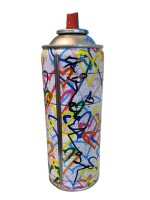