Roman born artist Piero Dorazio was classically trained in painting and drawing. Later, he studied architecture at university- which influenced his geometric approach to painting. Dorazio settled on painting and was influenced by futurists painters like Giacomo Balla. He is known for abstract geometric, cross-hatched style brushstrokes. Rich in color, his paintings are detailed and complex, a style that has been described as "post-painterly abstraction". Dorazio created a series of painting in the 1950's. These paintings consisted of thick bands of woven brushstrokes. The style of this series was described as a "visible net". His painting featured elements of density and complexity but also wrestled to bring about luminosity. His artistic presence influenced the beginnings of Russian Suprematism, Constructivism, and notably, Italian Futurism. Among other achievements, Piero Dorazio taught at the University of Pennsylvania School of Design and continued to exhibit until 2003. Piero Dorazio believed that "abstract art could change the world". 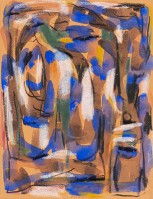 SELL an artwork by Piero Dorazio

Do you have an artwork by Piero Dorazio that you’re looking to sell? Send us the details and your net price and we will match it to our database of collectors.

Do you have an artwork by Piero Dorazio that you’re looking to sell? Send us the details and your net price and we will match it to our database of collectors.

What is geometric abstract art?

This is one of the forms of abstract art that uses geometric forms placed into a non-illusionistic space (though not always) and then combined into non representational(non objective) compositions. From the experience and results of the many years of research in the area of art, artists have suggested that the process of geometric abstraction can be a solution to the modern problems where some artists have been rejecting illusionistic practices.

Seek an Artwork by Piero Dorazio

If you are looking for a particular piece by Piero Dorazio, tell us what it is and we will match it to our database of sellers.