Beginning with splash and dribbled painting techniques, which mirrored the 1950's Abstract Expressionist American School, Pierre Soulages has built a remarkable body of work, centred around his attraction for the transfiguration of light and colour. For Soulages, these two elements constitute a theoretical plane of investigation, which he has been exploring for over seven decades now. He has developed over the years, a unique affinity for the black tone colouring, which he both interprets as an expression of the presence of light, as well as, the absence of light. This is the essential substance of his works. On the one hand, he uses black tones as a way to give back light in his paintings, and on the other hand, he allows them to define colour and luminosity, thus becoming an expression of radiance. Soulages was born in 1919 in the South of France, and is considered to be one of the greatest living painters. He had long lasting friendships with Pablo Picasso, Willem de Kooning and Mark Rothko among many other luminaries. Growing up near famous prehistoric locations, he said he must have been influenced by the primordial and symbolic executions, he saw in these ancient sites as a child. Soulages has famously coined his own technical approach 'Beyond Black', due to the interminable profundity which the absence of light unveils in his paintings. He refuses to explore conventional space and movement on his canvases, but prefers instead to pull back into something more elemental and unadulterated. He says his fascination with black paint reflects his belief that, unlike windows, which connect us to the outer world, painting should connect u to the world within. 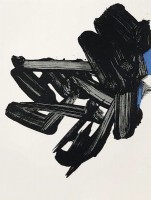 SELL an artwork by Pierre Soulages

Do you have an artwork by Pierre Soulages that you’re looking to sell? Send us the details and your net price and we will match it to our database of collectors.

Do you have an artwork by Pierre Soulages that you’re looking to sell? Send us the details and your net price and we will match it to our database of collectors.

What is ‘light and space’?

Refers to loosely affiliated movements that relate to minimalism, geometric abstraction and op art that originated from Southern California back in the 1960s and was greatly influenced by John McLaughlin. Artists focused on sensory phenomena such as light and others as the center of their work. In addition, they incorporated latest technologies in aerospace and engineering industries so as to develop light filled and sensuous objects.

Seek an Artwork by Pierre Soulages

If you are looking for a particular piece by Pierre Soulages, tell us what it is and we will match it to our database of sellers.