Renowned for his use of appropriated imagery, Richard Prince is a painter and photographer whose works often reimagine existing photographs and media in an attempt to encourage the viewer to look at them from a different perspective – his Cowboy series features several ‘rephotographs’ (a photograph of a photograph) of the original Marlboro cigarette adverts that featured a lone cowboy; in choosing such an iconic subject, Prince hopes to strip it of context and simultaneously celebrate and expose it as a false construct. Asides from his ‘rephotography’, Prince has also created an extensive body of ‘joke paintings’ - the jokes are usually simple and rely on a punchline, one such example being “I never had a penny to my name, so I changed my name.” Prince was in inspired by the work of Jackson Pollock from an early age, noting that he was drawn to someone who was “fairly antisocial, kind of a loner, someone who was noncollaborative” - he was also inspired by the painting techniques of Willem de Kooning. 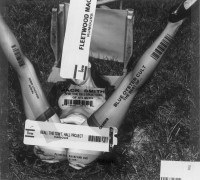 SELL an artwork by Richard Prince

Do you have an artwork by Richard Prince that you’re looking to sell? Send us the details and your net price and we will match it to our database of collectors.

Do you have an artwork by Richard Prince that you’re looking to sell? Send us the details and your net price and we will match it to our database of collectors.

What is Found Object?

Found object is the term used for a man-made or natural object, or object fragment which an artist either finds or buys, keeping it for inspiration or as a work of art. The artist may also modify it, or use it for collage or assemblage.

Seek an Artwork by Richard Prince

If you are looking for a particular piece by Richard Prince, tell us what it is and we will match it to our database of sellers. 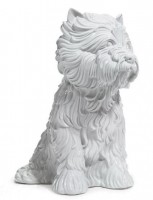 Puppy (vase in the form of West Highland Terrier),1998